What’s a skier to do when there is no more snow? One answer is to go find some snow in the Southern Hemisphere, like the mountains of Chile, Argentina, New Zealand and Australia.

As it has been between 90 and 100 degrees in Colorado lately, the idea of snow and skiing seems like a ‘cooling’ thought right about now. So we started thinking about those skiing in the Southern Hemisphere!

The famous Bob Gibson song from 1959 titled “What’ll We Do?” (Available on ITunes) has the following verses discussing this very issue of “What to Do When the Snow’s All Gone”:

In July of 1949 the Portillo Ski Resort was inaugurated under the supervision of the government hotel company HONSA. In 1961, the Portillo ski area was sold to private investors. The principal stockholder was Robert W. Purcell, a New York investment executive who initiated a development plan for the ski area which included new ski lifts and construction to increase the hotel capacity to 500 beds. The hotel was refurbished and a heated swimming pool and sauna facilities were added. These improvements enabled Portillo to bid successfully on hosting the World Alpine Ski Championship in 1966, an international event which marked the beginning of modern skiing in South America. European and North American skiers discovered that great skiing could be enjoyed during the summer months–and that South America had well-developed facilities and exemplary skiing.

By 1968, the international road between Chile and Argentina was finished, allowing easy access to Portillo via automobile.

Notice the famous Gran Hotel in the background. What looks like small figures are actually skiers in every possible move often seen on the ski slopes. Therefore the poster is also quite funny.

Ski in Los Andes Portillo Chile, from June to October is an ad that has been successfully calling out to the Northern Hemisphere skiers for decades.  If you want to ski all year or train in the summer, Portillo is one of the top spots in the world to get your fix. 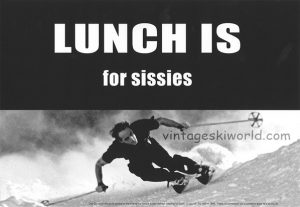 Eat an apple at the top of the hill and keep charging. That’s what Dick Durrance was doing in his early years of skiing. The image of Dick skiing in New Zealand is from the 1930’s. However the poster was created in the late 1990’s as an advertisement for Aspen Highlands.

Remember to PLEASE Comment to let us know if you are aware of other great Ski Posters from the Southern Hemisphere (and maybe were to get them) and we will give you a free poster from our site!

Also we love to hear about your “What’ll we do when the snow’s all gone ideas”! So click the title line above to leave us a comment.