As vintage ski connoisseurs, we have been collecting posters for 30+ years and carry diverse styles of ski decor including art deco, mid-century, modern and more. Plus our coveted, iconic photographs have been restored and are widely enjoyed as art posters today.

The collection includes ski art from limited editions and original prints to archival quality giclée reproductions. Posters are printed in-house on professional Epson printers. We also carry ski wall decor from famous watercolor artists, all the official Winter Olympics posters from 1924 to 2006, and vintage advertisements from ski areas around the world.

Since our ski season came to a screeching halt last winter, we would like to share and reflect on your favorite vintage ski posters through the years. 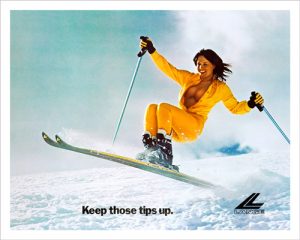 1. Lange Classic – Keep Those Tips Up

Sex sells and Lange jumped on that bandwagon back in the 70s with their four-decade long series of “Lange Girl” posters. Even though a new girl and boot is released every year, your uncontested favorite from our collection is 1972’s “Keep Those Tips Up”. Rumor has it that this was one of the first-ever airbrushed ski images. Some purchase it to have a ‘motivational poster’ in their home or office. 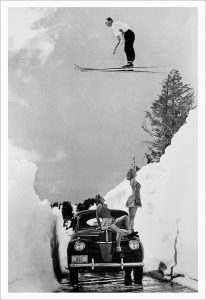 This classic shot was taken in the 1940s at the former Lassen Park Ski Area at Lassen Volcanic National Park, California. Although the lifts were removed in 1993, the area is still popular with Nordic and back-country skiers and receives over 250” of snow on average. The volcano is still active with the last explosive eruption occurring on May 22, 1915. Volcanic ash rained as far as 200 miles to the east. 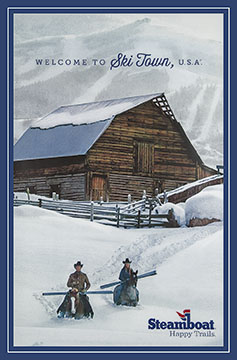 Competitive ski jumper Rusty Chandler, and local ski racer Jo Semotan modeled for this image taken during the early 70s. Painting Steamboat Spring’s western heritage and famous powder snow is prevalent, and this poster is still in production. It is just as popular a souvenir today as it was 40 years ago! this image is one of the best-selling vintage ski posters from Colorado ski resorts. 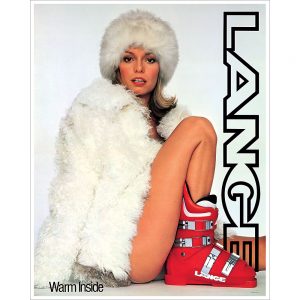 This 1978 Lange Ski Poster is another runner-up in our collection for sought after wall decor. The lovely “Warm Inside” Lange Girl comes from the time when the brand trademark was using models and movie stars in their iconic images. In later years they began using famous skiers and elite female athletes, including Julia Mancuso, in their annual ads. 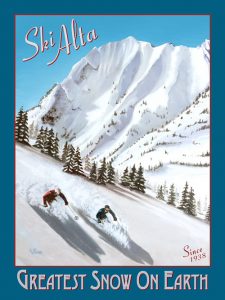 The character of Alta is captured in this beautiful image from Travis Anderson. Founded in 1938, Alta installed the second chairlift in the country and cost only .15 cents per ride. Although Alta has expanded greatly over the past 80+ years, they nixed the large resort feel to preserve a no-frills, quality skiing experience. Alta operates with only 6 strategically placed lifts, leaving skiers to find their own line in the abundant powder. This retro ski poster continues to support the ski area’s claim that they have the “Greatest Snow on Earth.” 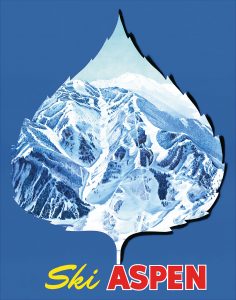 This 1960s advertisement for Aspen Mountain simply depicts the ski area within their symbol. Aspen was home to the longest chairlift in the world at the time, Lift-1. Around the same time Aspen Skiing Company acquired the newly formed Buttermilk and Snowmass ski areas. It wasn’t until 1993 that Aspen Highlands was acquired to create their signature, single four-mountain resort. 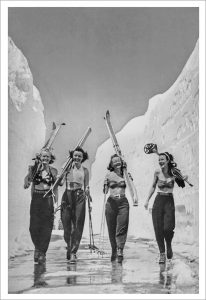 Another classic shot taken in the 1940s at the former Lassen Park Ski Area, which was known for the best spring skiing’ conditions. There was no lift in the early days, and it was quite the athletic feat to skin up the slopes. Thus, skiers were known to be carrying a layer of clothing by the end of their aerobic day. So these skiers are far from the normal dress code for women in the 1940’s. With the enormous snowfall accumulated during the epic 2018-19 season those walls measured 28 feet during the spring snow plowing efforts! 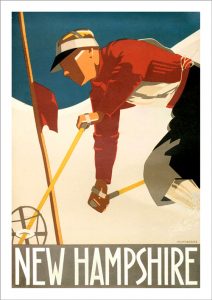 Lou Hechenberger created this art-deco poster in 1938 to show the thrill of downhill racing in Mt. Washington’s Tuckerman Ravine in New Hampshire. This poster is part of a collection from the New England Ski Museum. They have the largest ski history archive on the east coast. Locations in both Franconia Notch State Park and North Conway, NH house these treasures. 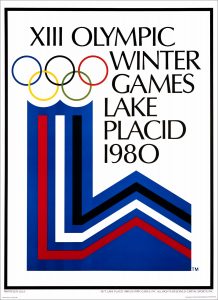 Our most popular Olympic Games poster comes from the 1980 Lake Placid Winter Olympics. The Lake Placid Club, founded in 1895, was originally built for summer sports but later became a winter sports destination. Lake Placid was selected for the 1932 Winter Olympics location and was the first Winter Olympics held in the United States. The Games were also the first Olympics not held in a major metropolitan area. By 1980, the Lake Placid Club qualified to host the Winter Games for a second time. This rare honor is shared only by Chamonix, St Moritz and Innsbruck. The US took home the gold in hockey under coach Herb Brooks and both American Mahre brothers won medals in skiing. 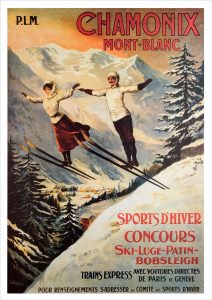 France’s most iconic ski area image was captured by artist Francisco Tamagno in 1905 prior to the winter season of 1906-07. From 1908 through 1956 the mountains surrounding Chamonix were changed forever with some custom-built tourist attractions including the Montenvers railway and The Flégère cable-car. For decades, this famous French ski poster brought skiers from around the world to enjoy the thrills of skiing the scenic and challenging terrain of Chamonix. The first-ever Winter Olympic Games were hosted here in 1924.

We hope you enjoy the history of these nostalgic posters. Our Vintage Ski Poster Shop is always open on vintageskiworld.com.